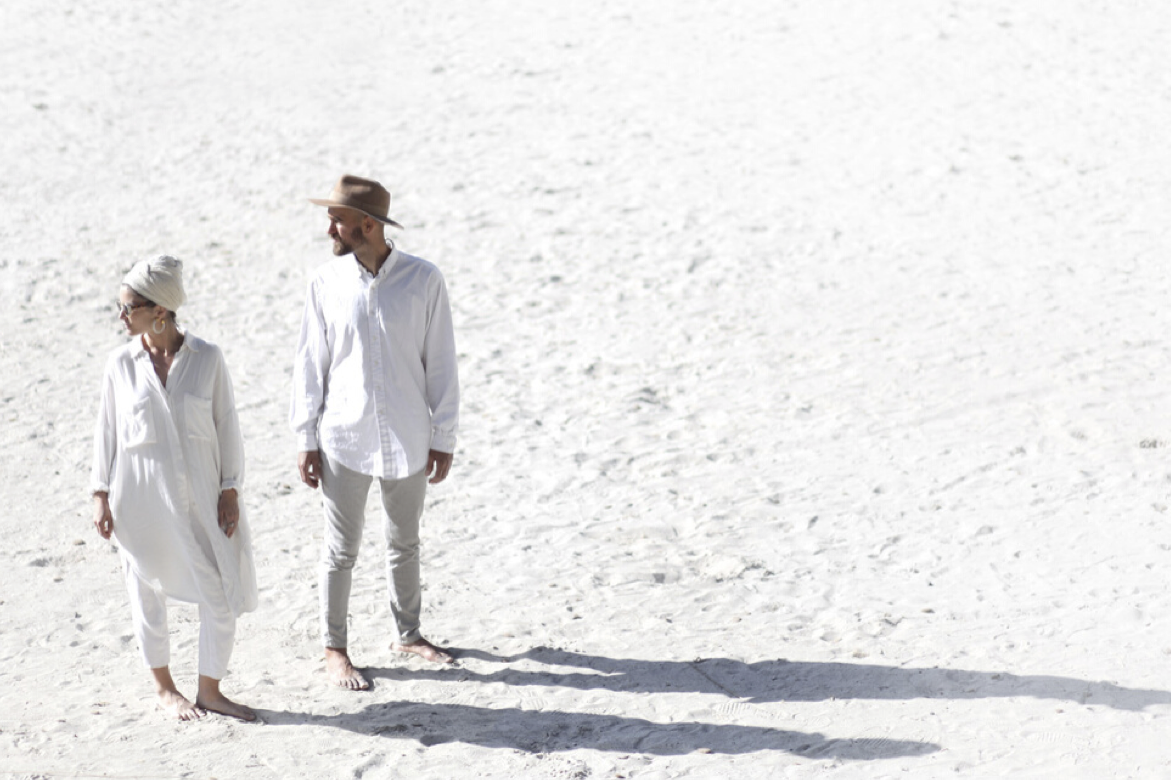 Akal Anand: Can you tell us about the process of creation as Shiva and Shakti, when male and female come together to co-create, how does this connection unfold?

Sunni.ai (Bir Kirtan)​: Well we actually started to date out of creating music together. I came with the idea to play bowls in her class and we joined forces as she proposed to play the gong. It was beautiful. We met on a deep level playing together (laughs). That was us meeting with the creative force.

Birjiwan​: In our creative process, he brings the structure, that’s the Shiva part, he will start playing an instrument and then I will come in and start to sing, adding an emotion and the corresponding sound code, the Shakti, and putting it onto that structure. And so it is very simple. It’s very, very intuitive.

“In our creative process, he brings the structure, he will start playing an instrument and then I will come in and start to sing, adding emotion and the corresponding sound code and putting it onto that structure.” — Birjiwan

The Sat Nam Sessions (Robert)​: This is a great question because we’ve been laughing about this for a long time now. The truth is this. I grew up with mantra meditation, Bhakti yoga right. So then I fall in love as a young man with this beautiful half Indian lady. Fall in love, get married, have children. Think I know everything about this person. And over 10 years into our marriage. all of a sudden, Mitali looks at me and says “why don’t we play our own sounds at our seminars?” And I look at her and I say — this is a true story — “that’s a great idea, but who would sing?” And she looks at me, you know, like only wives who have been married for 10 years and know how stupid you can be. And then I said “But you can’t sing because I have never heard you”. And she said “I think I can do it”. And we sat down in that very moment, I picked up a guitar and she sang and I got goosebumps.

Akal Anand: Can you give us a sense of what is behind your artistic name and choice of mantras, “Sunni.ai” meaning “deep listening” and “Sat Nam” “true essence” — what are some of the ways that you think we can personally and collectively move towards listening deeper and being in our true essence?

The Sat Nam Sessions (Robert)​: So we just wanted a name that would be symbolic to our practice. However, we wanted to balance this because I’m not into dogma and I’m not into religion. And for me, the mantra and especially that part on “Sat” symbolizes everything I like about spirituality. “Truth is my identity” symbolizes for me that there’s many different paths to our own heart, the one creator and all of us as a community. 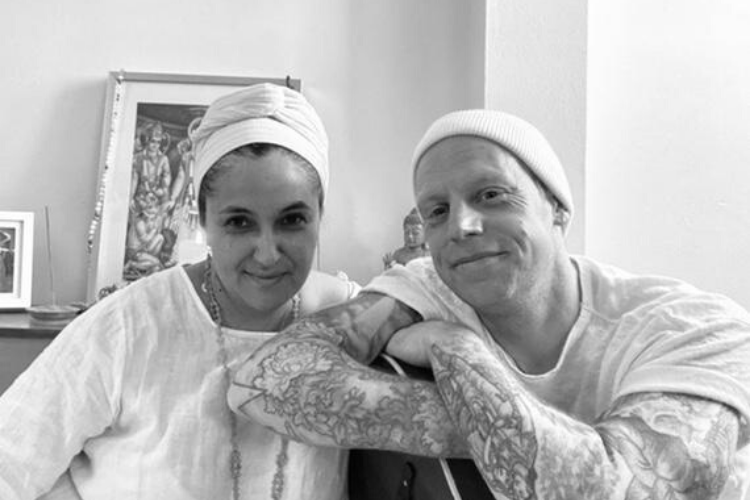 “Truth is my identity” symbolizes for me that there’s many different paths to our own heart, the one creator and all of us as a community.” — Robert

The Sat Nam Sessions (Mitali)​: I think learning to trust your intuition is definitely a way to connect to your true essence. You don’t have to listen to the outside, but inside and find your way back to your own essence. As children we are still so connected to our intuition and then somehow we lose it along the way. Then many of us I think are returning to it in meditation. I grew up with Indian music and when I found Kundalini Yoga and Gurmukhi mantras I instantly felt a connection. Just listening and chanting and trusting brought me back to myself. These mantras brought my own essence out again by chanting them, letting them move inside me and through me I found my intuition again.

Akal Anand: And what about you Sunni.ai?

Sunni.ai (Birjiwan)​: We wanted to invite the listener to go beyond the surface. It’s a bit of a similar process. There’s something so important in the way we listen. When you base your identity on the external noise that comes in, you create a personality that looks like this or that, but it’s just a response to what the outside is made of. When you are connected to your essence then you can just open yourself and allow yourself to really listen. And it works the other way, when you allow yourself to listen deeply, you connect with the essence of everything including your True Self. What is around? What lies beyond the surface? You get to know the world in a different way because you are in that state. In the end, this is what opening the throat chakra is all about, we listen and listen until we make ourselves into zero, enabled to relate to the sublime and with the soul, with something bigger than the limited character, you feel yourself aligned and coming back to your senses. To deeply listen is to make yourself empty enough to hear what is behind of the limited personality.

“To deeply listen is to make yourself empty enough to hear what is behind of the limited personality.” — Birjiwan

Akal Anand: Do you guys see yourselves playing together at some point?

The Sat Nam Sessions (Robert)​: It has to happen, I see touring on the horizon. (laughs) It’s already planned out in
my head. It just needs to unfold.

Sunni.ai (Birjiwan)​: I don’t know if you know this, Akal Anand, but we have a very deep friendship. The four of us are very close. When we decided to meet and we had a crush, like a very big friendship crush. And we are still in it!

The Sat Nam Sessions (Robert)​: It was one of those things, when I met Bir Kirtan and Birjiwan, I had the feeling I’ve known them for a long time. But you know, I didn’t. And that happens so rarely for me. But when it happens, I’m really grateful. There is unity in diversity. I think in our musical projects, we each bring something different to the table. It’s not that we try to do the same, but the essence is the same. And then it comes back to what we achieve so beautifully explained just with the names. So there needs to be multiple gatherings of these two musical projects in the future. We’re going to get on this.

Akal Anand: There is so much “pop” Kundalini and mantras music out there. But listening to your albums you both did something very sophisticated and different. Can you tell us about the sound frequencies and sound intention that you put in making this music?
Sunni.ai (Birjiwan): ​You know when we create, it’s like we want to deliver something. And you just know that what you are doing is beyond. It’s not just me or him delivering something, it’s our interpretation of something that is bigger than us.

The Sat Nam Sessions (Mitali)​: I feel exactly the same. I feel like it’s not really mine. It’s just like it’s an offering. I know it’s me, but it feels like, no, this is just here for you. It’s an offering.

The Sat Nam Sessions (Robert)​: I think you can also feel a little bit of the punk background, even though it’s not punk music, it’s the way I play guitar. And I think that’s the first thing Guru Jagat picked up on. When she heard it, she was like “I love it. It has a punk spirit.” And what I mean is it has an independent spirit, it sounds a little different than a lot of the other mantra music out there. And I think both music acts achieved this.

Sunni.ai (Birjiwan)​: Also what you can feel in both is the purity of the intention.

The Sat Nam Sessions (Mitali)​: And the difference might also be that both projects are created by couples. And I feel like there’s such high love frequency that the music transmits that this might make it a little different from some solo artists.

Akal Anand: So in the process of creation, where so many things go into this time capsule, into your individual growth and also your growth as a couple. How does it feel to suddenly have that time capsule out in the world, and have your music felt and interpreted by thousands of people?

The Sat Nam Sessions (Robert)​: It’s weird for sure. (laughs) Because it’s a representation of your love, of your relationship. But on a different level than it is if you would just meet us in person. I think sound surpasses a lot of other things. Like, I could try to explain what I love about Birjiwans and Bir Kirtan’s achievement and unity. However, I could never explain it as well as just putting on their song. The songs carry more weight than our words.

“I could try to explain what I love about Birjiwans and Bir Kirtan’s achievement and unity. However, I could never explain it as well as just putting on their song.” — Robert

Akal Anand: So a song speaks louder than words.

The Sat Nam Sessions (Robert)​: It really does.

Sunni.ai (Birjiwan): ​It’s an authentic renaissance. You have two entities and then this music we create would be a third entity. And it’s a renaissance that you want to nurture. And when we nurture it, we let it flourish in the moment, we make time to create together, we make time to bring that all together in the studio. I really want to spend time every day with him to create.

The Sat Nam Sessions (Mitali):​ To feel the love that we have for each other and the love we have for the music. If we could make one person‘s day a little bit brighter as they feel a love frequency when they listen then that is already more than enough for us to be so grateful for.

Akal Anand: I definitely did. I’ve been singing on Ang Sang Wahe Guru all day. (laughs) Guys – what do you feel most grateful for at this point?

Sunni.ai (Bir Kirtan): ​We listened to it so many times. And we would always go and change something. And then we looked at each other and we said, ok it is ready. There’s is this small green button and once we push it. That’s it. (laughs) There’s a lot of letting go in this process. And so the energy that we share now, which is not ours, which is healing, it’s just vibrating everywhere. And it is this feeling we are so grateful for.