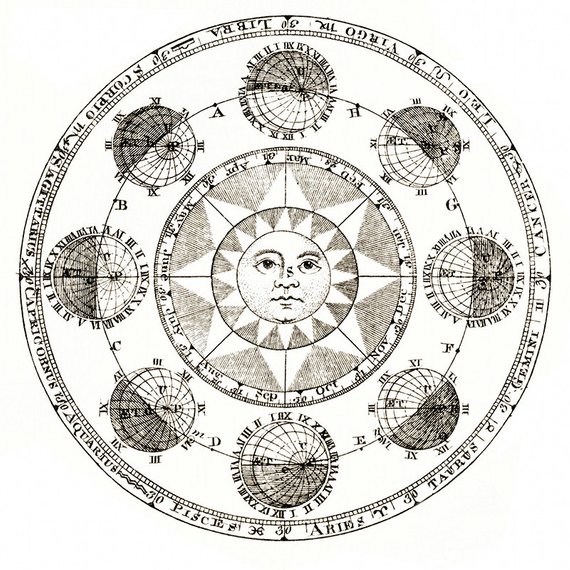 Because in our current cultural moment, we consider forward momentum to be progress and backward movement to be the opposite, that is, the reversal of progress, the word retrograde scares us. When I say Mercury is in retrograde (in residency here March 5-March 27, depending on your earthly location), what do I mean? I mean that from our earthly point of view (think of looking up at the sky from wherever you are on the ground or actually do it), Mercury appears to be moving backward. Planets don’t actually start moving backward. It simply appears this way because of our relative positions around the sun. This is exciting because it already tells us something that should serve as inspo but may, in fact, scare us (fine line or no line); it really IS all about perspective. Not only does Mercury appear to be moving backward, but it’s moving backward in the 12th sign of the zodiac, the famous fishes of the wheel, the dreamy sign of Pisces.

I think of Pisces as the culmination of the previous eleven signs. It sits opposite the wheel from Virgo, the separator of wheat from chaff, the great discriminatress, married-to-no-man-but-the-land-lady. This already says much about Pisces. If its opposite is discrimination and the editorial impulse, Pisces itself is inclusive. At its best, it is spiritual enlightenment incarnate, the very principle of astrology — as above, so below. At its worst, it’s the Neptunian underworld (the sea, but the bottom of it) of addiction and confusion and wait-but-where-am-I-really? Think of the Sylvia Plath musing, “Perhaps when we find ourselves wanting everything, it is because we are dangerously close to wanting nothing.”

But what about Mercury, the actor performing retrograde in the sign of everythingness? Mercury is the planet of communication. Mercury is quick-witted, ruler of Virgo and Gemini, and the Milky Way Galaxy’s quickest, most unpredictable (arguably) planet. When Mercury was first discovered, we thought it was two planets. Mercurial, mercurial, mercurial. I’ve been called mercurial forever and I choose to take it as a compliment, though I’m sure not everyone has meant it as such. Mercury out of balance is like the Cheshire Cat, all talking in circles and confusing us and making us read signals in its smoke and mirrors. An exalted Mercury is smart, one hell of an editor, and gets the thing done with speed and witty banter. Pisces can be a bit too vague for Mercury’s taste, but it can expand its edges, make it a more versatile actor, as it were.

What does this mean for us earthlings? Mercury in retrograde is a time for all the re-

I like Mercury in retrograde for its nudge to focus inward, to get reflective, to get our shit together before the sun enters the fiery action sign of Aries and spring begins in our hemisphere. The best recent real-world example I’ve seen of this was the ultra-reflective panel discussion on intersectional feminism at Rama NYC, where a panel of incredible women got real about lack of diversity in wellness spaces, privilege, cultural appropriation, and how we can move forward towards more inclusive (remember Pisces and inclusivity?) and sustainable practices. REAL begins with RE.

The watery vagueness of Mercury in Pisces (ever have an underwater conversation? It’s all bubbles and nonsense…) is tamped down by the retrograde position. We’re forced to expand our modes of communication because it is from active reflection that we are pushed to grow. Ever have an underwater conversation? It’s fun. It’s trippy. It, like, expands your mind. And eventually, you shoot up to the surface of the water and tell your friend what you were actually saying and then you back under, on and on. and on.